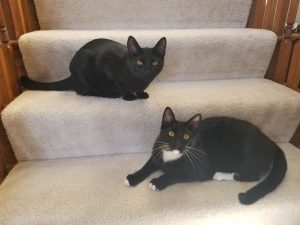 We lost the last of our cats in February just as COVID arrived in the US. The house felt empty and the kids were missing having a pet companion. Still, we wanted to take the time to mourn Griffin and wanted to adhere to the lockdown ordinance of St. Louis County. During this time, we took a lot of time to discuss the direction on where we wanted to head as a family and decided that it would be best to focus on finding kittens who were rescues. We also wanted to find kittens who had been socialized well, and would have a temperament to handle three girls between the ages of 10 and 11.

In June, we reached out to a coworker who was a foster parent for The Cat Network to find out if there were any upcoming kittens available for adoption. The timing worked out perfectly, as there was a litter of black and tuxedo kittens that were getting close to their adoption age. We ended up picking out two kitten brothers – Tux and Mew.

We found our foster parent contact to be very helpful in ensuring the kittens had a smooth transition home. She provided us with great advice on how to keep their claws trims, and using the zen clipper has been very helpful.

Mew and Tux have been with us since the summer, and they have settled in nicely. Our girls absolutely love them, and they love to sit in a nearby chair and listen to conference calls during the day. At night, they both like to unwind by wrestling each other and spending time with the family. They are both fantastic cats and we are so happy we used The Cat Network. 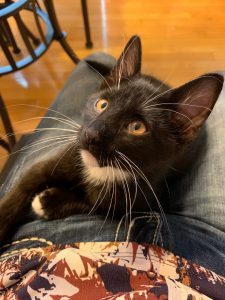 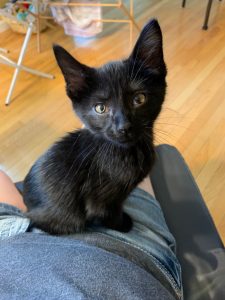